“A” Trio + EDWARDS/MØSTER/KNEDAL ANDERSEN + BEECKAERT/STEVENS/WARMOESKERKEN – CANCELLED DUE TO THE CORONA-COVID19 SITUATION ! 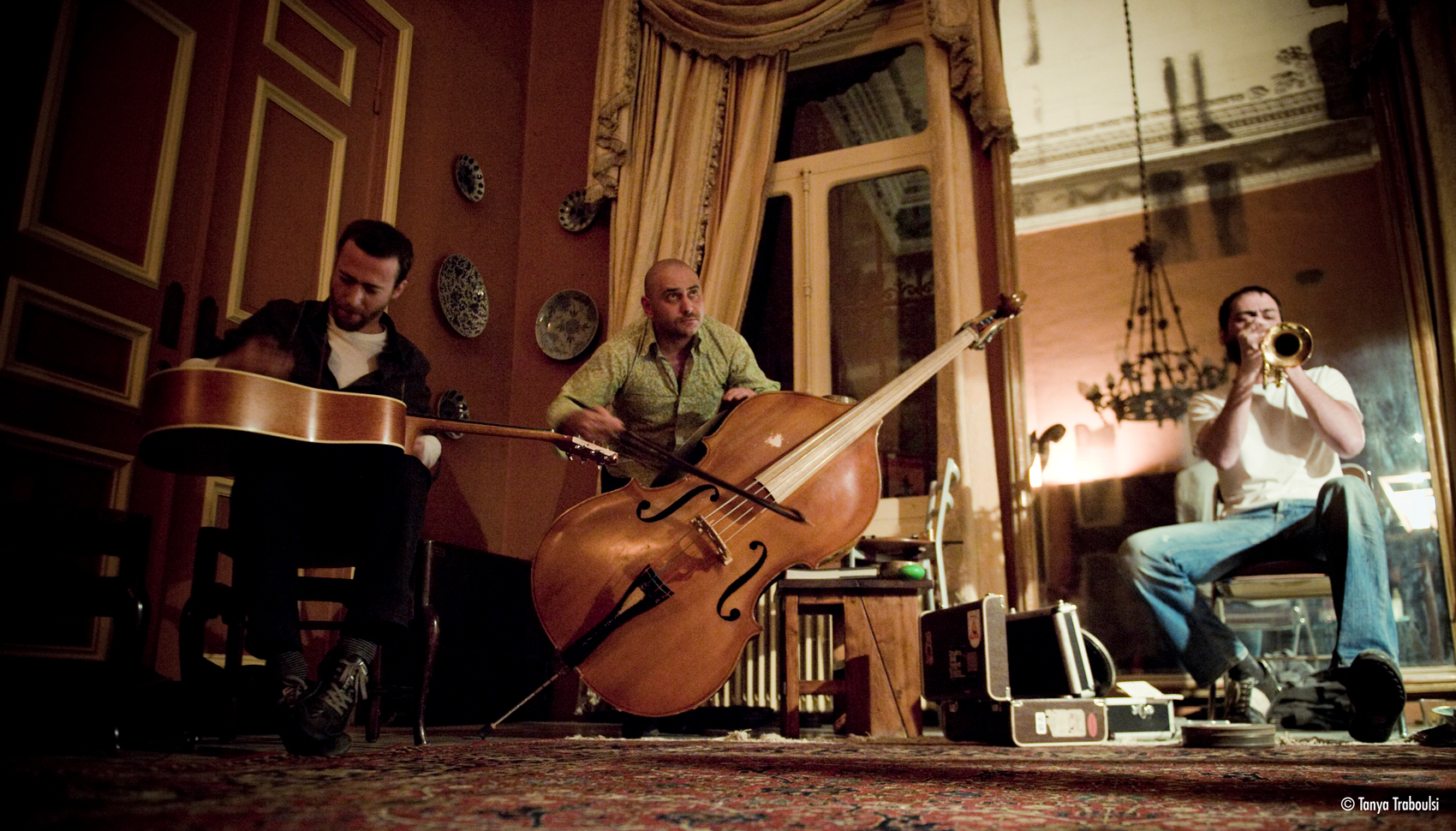 “A” Trio is probably the oldest Lebanese improv group. Formed in 2002 for a concert during  the Irtijal’02 Festival, they went on to record the first free jazz CD to be produced in the arab world (“A”, La Cédéthèque, 2003). Their music later expanded towards a more textural approach, relying strongly on prepared & extended techniques for a heavy diversion of their respective instruments. Individually, Mazen Kerbaj (trumpet), Sharif Sehnaoui (guitar) and Raed Yassin (bass) are three of Lebanon’s most active musicians, organising the Irtijal international festival since 2001 and running two record labels: Al Maslakh – devoted to publish the un-publishable on the Lebanese musical scene, and Annihaya – with a focus on sampling, recycling and the displacement of various aspects of popular culture. The “A” Trio has so far collaborated with artists like: Alan Bishop (Sun City Girls), improv pioneers AMM, Turkish free jazz band KonstruKt, Lebanese punk-rock band Scrambled Eggs and acclaimed Australian trio The Necks as well as various musicians including Michael Zerang, David Stackenäs, Martin Küchen, Georg Wissel, Tony Buck and Michel Doneda. Sehnaoui and Kerbaj performed earlier in the Oorstof series with Karkhana in 2015 and 2016.

Great trio that sees one of the world’s most consistently compelling bass players, John Edwards, pitted alongside two of the most in-demand players in the Norwegian improv scene in the form of reed player/composer Kjetil Møster, and drummer Dag Erik Knedal Andersen.

Kjetil Møster’s approach sits at the interface between electronic based rock, improv and jazz. Together with Maja S.K. Ratkje, Paal Nilssen-Love and Lasse Marhaug, he is one of the originators of the Norwegian All Ears Festival in 2002. Touring with bands such as Ultralyd, The End with Anders Hana, Greg Saunier, Kjetil Møster, Mats Gustafsson and Sofia Jernberg and his own quartet, Møster!, he has played with amongst others Motorpsycho, Chick Corea, Pat Metheny, Mats Gustafsson, Jon Christensen, Forde Gjerstad and Paal Nilssen-Love.

Perhaps best known for his ‘hyperactive-take-no-prisoners’ approach to drumming, Dag Erik Knedal Andersen has been an ubiquitous musician on the Norwegian improvised music scene over the last decade, as well as touring all over Europe with groups such as SAKA (Oorstof 2016)  and AKODE.

John Edwards is a true virtuoso whose staggering range of techniques and boundless musical imagination have redefined the possibility of the double bass and dramatically expanded its role, whether playing solo or with others. Perpetually in demand, he has played with Evan Parker and Steve Noble (Check Dropa Disc’s PEN cd), Joe McPhee, Peter Brötzmann, Mulatu Astatke and many others.