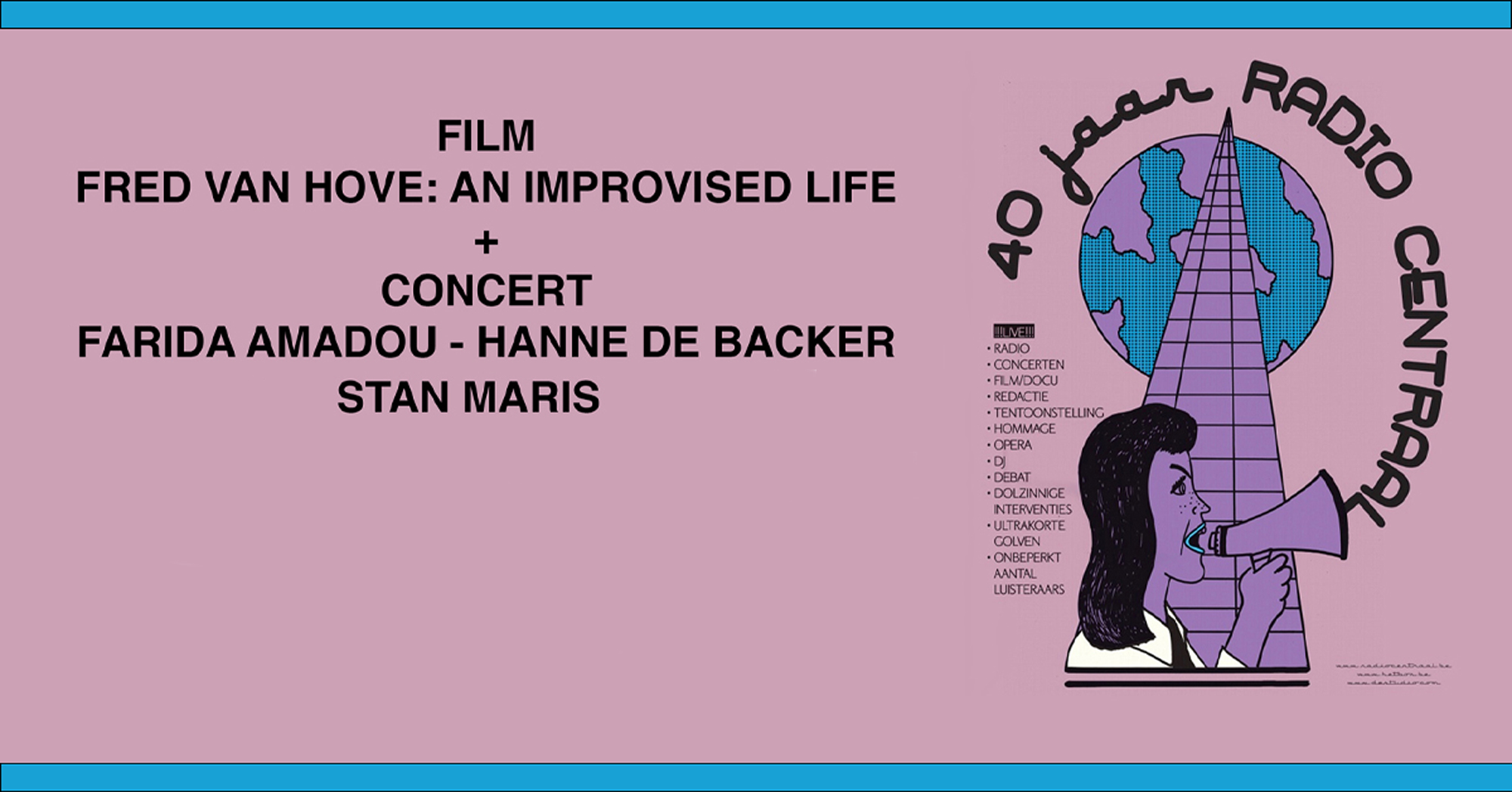 Since Covid 19 prevents you to celebrate 40 years of Radio Centraal with us in person, Radio Centraal’s Freakscene and Oorstof offer you the next best thing: a radio broadcast and video streaming of the live concert of Farida Amadou, Hanne De Backer and Stan Maris and a unique chance to view Fred Van Hove: An Improvised Life by Philippe Cortens in avant-première …

For the free/gratis live video streaming of the concert go to DE STUDIO or TV CENTRAAL –
Live audio only> go to RADIO CENTRAAL
If you want to support Radio Centraal and the artists performing you can do so by donating whatever you can spare here:
[wdgk_donation]

For tickets and access to the avant-première of Fred Van Hove: An Improvised Life by Philippe Cortens click on tickets (available on 7/11 only). 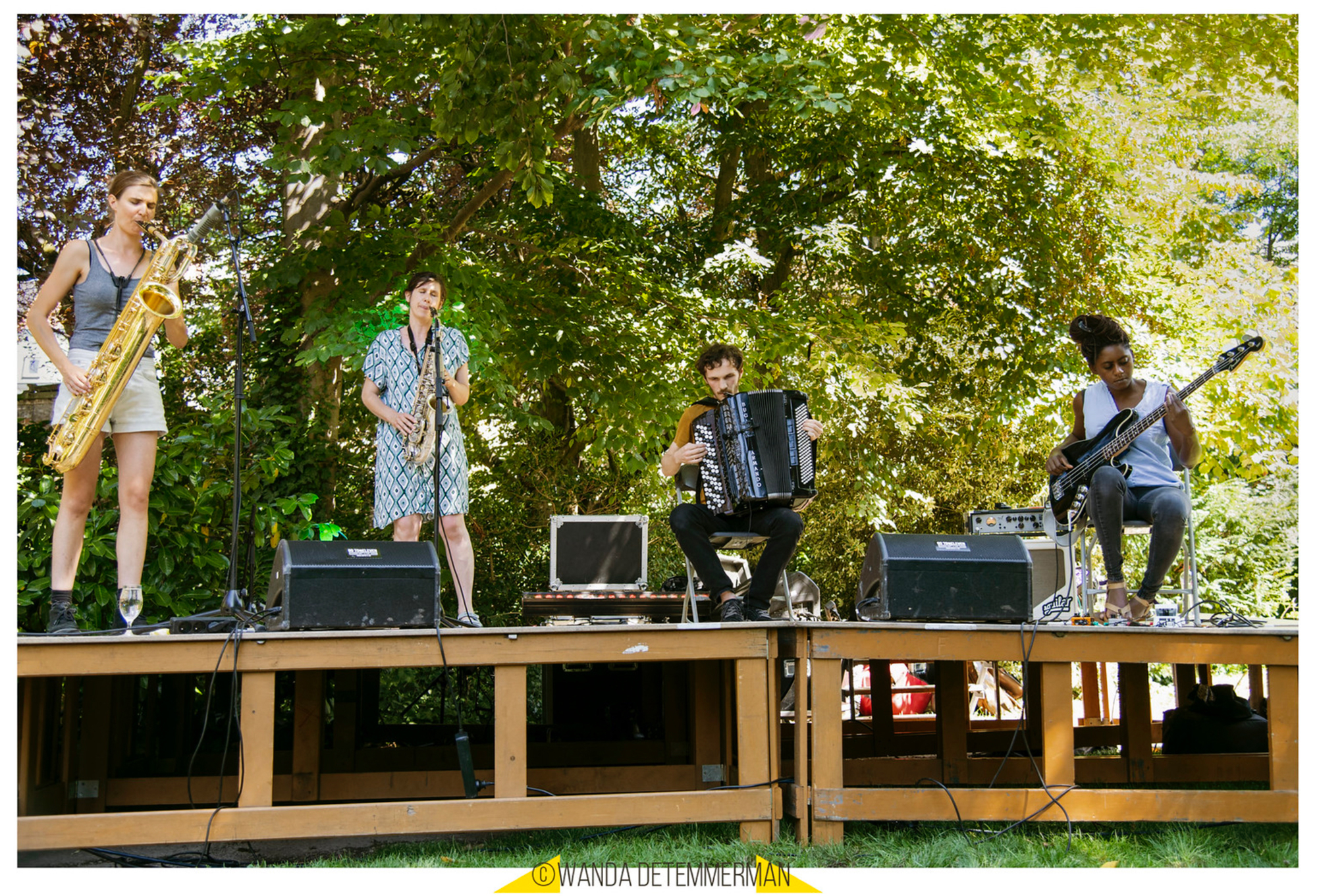 After the first successful collaboration between Ken Vandermarks Marker and the Belgian players Farida Amadou (el. bass), Hanne De Backer (baritone sax), Audrey Lauro (alto sax) and Stan Maris (accordion) all plans for new encounters where suspended until further notice due to Covid-19.  Though Amadou, De Backer, Lauro and Maris showed us earlier at the Citadelic Festival, that their quartet is a solid unit in its own right, for this occasion it will be the trio of Amadou, De Backer and Maris that takes on the challenge to perform as a trio for the first time, as Covid 19 decided that Lauro and family needed to go in quarantine as a preventive measure.

Amadou, Maris, De Backer and Lauro are regular guests at the Oorstof concert series and at previous Summer Bummer Festivals. Amadou shared the stage with Sonic Youth’s Thurston Moore, Steve Noble, Peter Brötzmann, Rodrigo Amado and Tom Malmendier; De Backer toured with Agnes Hvizdalek, Raphael Malfliet and Henrik Munkeby Nørstebø as g a b b r o and collaborated with Paal Nilssen-Love, Angel Bat Dawid, Signe Emmeluth and The Ex; Lauro made her mark on stage with musicians like Mette Rasmussen, Anna Högberg, Pak Yan Lau, Christine Abdelnour, Yuko Oshima, Ada Rave, Adam Cadell and Jasper Stadhouders; Maris was one of the revelations of the Summer Bummer festival in 2018 and stood out at the Visitations event in 2019.

Pianist and composer Fred Van Hove (°1937) was involved in the Big Bang of European free improvisation (Machine Gun by the Peter Brötzmann Octet), but also became one of Europe’s finest and most underestimated improvisers. Mostly known for his 70’s trio with Brötzmann and Han Bennink, Van Hove’s trajectory over the past 4 decades has been one of the brilliant, but unsung stories of the music. How brilliant this trajectory exactly was will become even more clear in the brand new documentary Fred Van Hove: An Improvised Life, shot by director Philippe Cortens – also check Juul’s Ears and Jak Sels – commissioned by Studiecentrum Vlaamse Muziek.

“To summerize a career spanning more than sixty years in a documentary was like trying to squeeze apple juice from an orange. So Fred Van Hove: An Improvised Life turned out more like a portait – or at least an attempt at – of a strong-minded musician that always has and still is going against the grain, no matter what. Peter Brötzmann, Sven-Åke Johansson, André Goudbeek, Walter Hus, Cel Overberghe, Bram Van Camp, Els Vandeweyer, Jan Michiels, Rik Hancké, Wim Opbrouck, Luk Perceval and, last but not least, Mie Van Cakenberghe wholeheartedly confirm Van Hove’s legendary status on camera. His influence on free improvised music and free jazz is invaluable and acknowledge by musicians and publice world wide. Long live Fred Van Hove ! Philippe Cortens

A portrait by Philippe Cortens commissioned by Studiecentrum Vlaamse Muziek.
With the relentless support of Jan Dewilde and Sound in Motion.