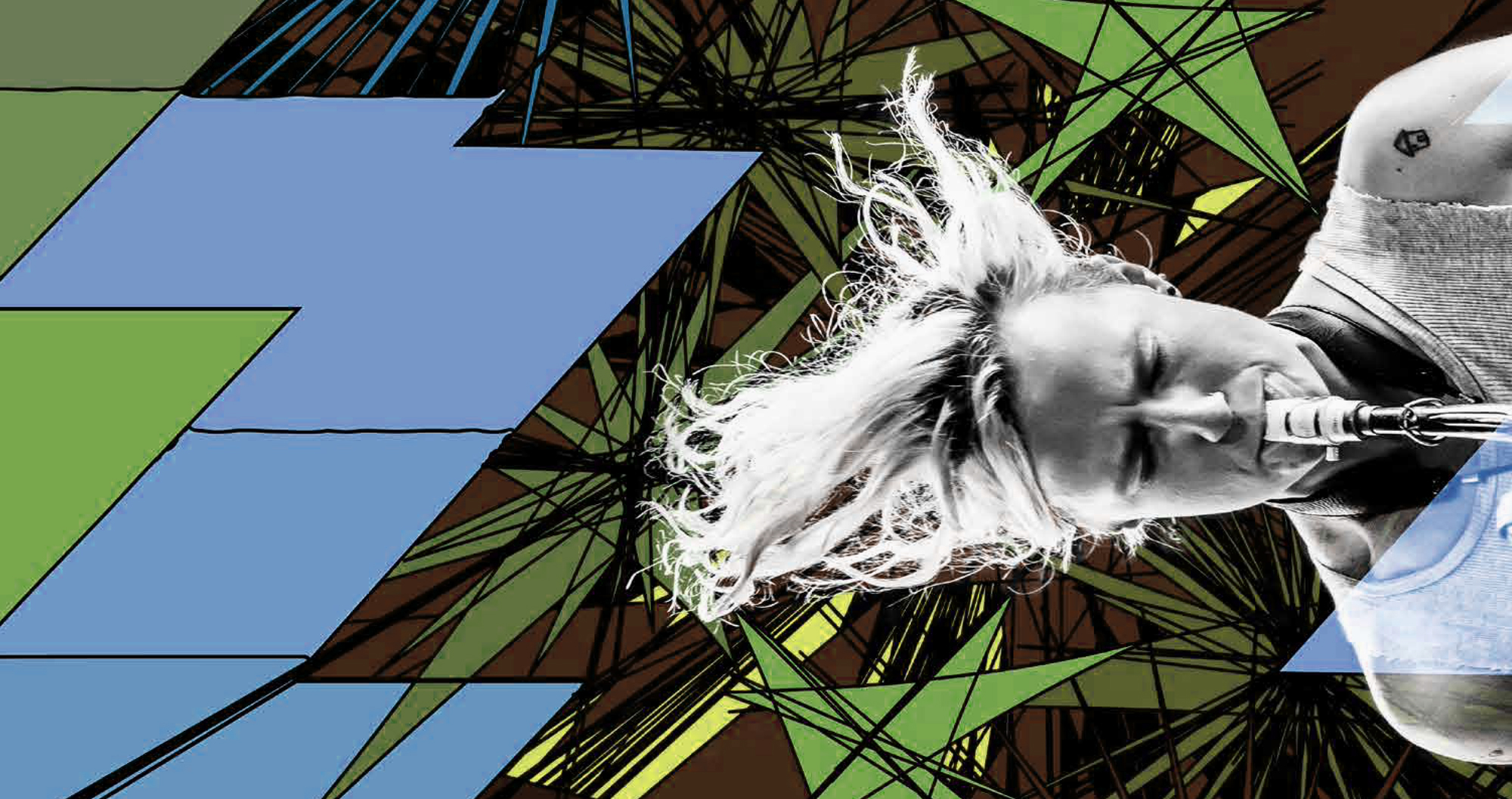 For the fourth edition of the two day Summer Bummer Festival we return to the fantastic premises of DE Studio. Besides the diverse and adventurous festival programme there’s a free of entrance area on both days with a record and label fair, an expo, a workshop, a performance and a food stand with delicious homemade slow food.  Your host for the two days to guide you safely through the extended Summer Bummer programme is AB mainstay Kurt Overbergh …

On Day 2 the musical past, present and future are brought together even closer with: the historic meeting between free jazz pioneers Fred Van Hove (piano) and Peter Brötzmann (tenor sax, clarinet) who will share the stage as a duo for the first time since time immemorial; Sonic Youth mainstay Thurston Moore joining bass player Farida Amadou and drummer Steve Noble sonically rinsing your ears under the M.A.N. banner; A further Scandinavian raid of new talent with the Danish/Norwegian sensation Emmeluth’s Amoeba led by alto sax player Signe Emmeluth, piano player Christian Balvig, drummer Ole Mofjell and guitar player Karl Bjorå; yet another confirmation that the Belgian New Wave of Jazz smoothly and in a very successful way transcends the national borders with the unedited collaboration of the English baritone sax player Cath Roberts (Sloth Racket, Favourite Animals), trombone player Tullis Rennie (Foirm Fada) and the Belgian guitar player Dirk Serries (Fear Falls Burning, Yodok III, … ); a triumvirate that reminds us that Chicago was and still is a hotbed for exceptional musical talent with Angel Bat Dawid on piano, clarinet and voice, Jeb Bishop on trombone and Frank Rosaly on drums; Radical Australian violin player Adam Cadell who has the music of Henry Flynt, Tony Conrad as well as African music on the top of his inspiration list; a workshop for young and old making music with the famous sound sculptures of the Baschet brothers led by Baschet authority and adept Michel Deneuve; a late night party to end this fourth edition on a high and to celebrate 30 years of Radio Centraal’s Freakscene with the unique trio of Angel Bat Dawid (clarinet), Hanne De Backer (baritone Sax) and Signe Emmeluth (alto sax) – respectfully replacing  the Swedish sisters Byrne who are not able to perform as Ectoplasm Girls due to unforeseen circumstances, an unprecedented trio of Yves De Mey, Gino Coomans and Louis Evrard that merges electronics, snares and percussion in a startling manner and DJs Freak and Daniël De Wereldvermaarde Botanicus to send you off dancing into the night. For the celebration of the eightieth birthday of piano player Fred Van Hove in 2017 free jazz pioneer Peter Brötzmann had to forfeit, but for Summer Bummer 2019 it’s finally going to happen. On the second day of the festival Van Hove and Brötzmann for the first time since time immemorial will be reunited as a duo on stage. These gentlemen – both individual and together in stellar combinations – have set the standard for the development of free jazz and improvised music in Europe since the sixties, and still play a significant role to this present day. Although this historic meeting already captures the imagination we want to make it even more special by presenting the brand new Dropa Disc release Fred Van Hove at 80, a beautiful book in tribute to Van Hove’s fantastic career written by Hugo de Craen and introduced by Joachim Ceulemans, including three cd’s recorded in the celebration year 2017 – piano solo, organ solo and trio with Evan Parker and Hamid Drake.

Since we had B.A.N. (Brötzmann, Amadou, Noble) lined up why not add M.A.N. (Moore, Amadou, Noble) to the line-up for Summer Bummer 2019? That’s what drummer Steve Noble and bass player Farida Amadou jokingly asked us. Yes, why not? It would be a nice stunt to see a Belgian bass player shine on the main stage two days in a row and every day next to two internationally renowned artists. After two scorching M.A.N. concerts at Cafe Oto Sonic Youth mainstay and guitar player Thurston Moore was very much in favor of a first meeting with this dynamic duo outside of London. Noble and Amadou reacted  promptly with  a spontaneous wham, B.A.N., thank you M.A.N. and Summer Bummer day 2 had it’s perfect second headliner locked. The Danish alto sax player Signe Krunderup Emmeluth is barely 26 and resides in Norway. For a young artist her list of collaborations with superb artists like Mats Gustafsson, Paal Nilssen-Love, John Edwards, Pascal Niggenkemper and Mette Rasmussen is already pretty impressive. Playing a desicive roll in bands like Konge and Owl it’s the debut release Polyp by her band Emmeluth’s Amoeba from 2018 that sets things in motion on an international level. Together with the Danish piano player Christian Balvig and Norway’s Ole Mofjell on drums and Karl Bjorå on guitar Emmeluth manages to let freejazz, improvised music and contemporary chamber music happily clash into a new challenging entity.

Since more than thirty years Belgian guitar player Dirk Serries makes an international mark with music on the border of avant-garde, industrial, experimental and ambient. An invitation by Norwegian drummer Tomas Järmyr to join Yodok III with Kristoffer Lo on Tuba boosted Serries’ fascination for improvisation which led to the initation of the New Wave of Jazz imprint and an intense series of live performances and releases with stellar improvisors like Steve Noble, Colin Webster, Alan Wilkinson, John Dikeman and Martine Verhoeven. Serries and English baritone sax player Cath Roberts (Sloth Racket, Ripshaw Catfish) met earlier in Tonus – a rotating international ensemble formed by Serries. Roberts in her turn realised the cd Blurts/Growls in collaboration with improvisor, composer, trombone player Tullis Rennie for the Luminous Label in 2017. For Summer Bummer Serries – playing acoustic guitar on this occasion, Roberts and Rennie wil take the stage as a trio for the first time.

It’s a true achievement of Chicago’s Angel Bat Dawid to introduce jazz, improvisation, avant-garde and experiment with big organisations and the big audience without making any compromises. Never shy of a musical challenges she gladly accepted our invitation to play a concert as a trio with trombone player Jeb Bishop and drummer Frank Rosaly, both old and ex Chicago hands. Jeb Bishop (also see Summer Bummer day 1) didn’t need much convincing to join in and Frank Rosaly, the sublime percussionist that swapped Chicago for Amsterdam to spread his polyrhythmics world wide, is in our minds an ideal addition. Brisbane based violinist Adam Cadell is a fiddler on the edge with roots in academia, and classical composition, but with a unique and eccentric approach that seems to leave him as a perpetual outsider, researching, playing and learning from weird and wonderful fiddlers from around the globe, including becoming a student of the legendary, Henry Flynt. Lengthy stays in Ghana and Senegal where transformative musical experiences, proving without a doubt that the true avant-garde is with the people – check Cadell’s latest solo album release Bush Songs. Cadell is a keen collaborator, working with artists all over the world, including The Unmanned, French artists Fabien Giraud & Raphäel Siboni and Gascon radical rock band Artùs. Cadell also co-runs BOOM Vacuum, a Brisbane underground music happening, is a co-founder of cult instrumentalists The Scrapes, and plays regularly as a member of bands Jive Canyon, The Quartet For The End Of Time, Exaybachay, a duo with drummer Tony Irving and a duo with Carter Thornton.

Due to unforeseen circumstances Ectoplasm Girls had to cancel their scheduled performance at this years Summer Bummer Festival. They will be replaced respectfully by the stellar reed trio of Angel Bat Dawid (clarinet), Hanne De Backer (baritone sax) and Signe Emmeluth (alto sax) who are teeming up for the first time ever.

Musical centipede Yves De Mey had his electronics bounce of in all directions at the Summer Bummer Festival in 2017. On releases like Bleak Comfort (Latency, 2018), Sueda (Line, 2019) and Exit Strategies Part 1 (Entr’acte, 2019) De Mey keeps pushing the limits of electronic music as much as possible. In order to enhance the sonic possibilities even further De Mey will team up with cello player Gino Coomans (Sheldon Siegel) and drummer/Percussionist Louis Evrard (Ottla, Tandaapushi) for a unique live performance at Summer Bummer 2019.

In conjunction with his work as a performer and a composer, Michel Deneuve has always given part of his time to music teaching. In collaboration with Bernard Baschet, Deneuve worked on perfecting a new system for teaching music, particularly well-adapted to children thanks to a series of beautiful small and play-oriented instruments – with simple keyboards and rich and varied tones – which form what is called the “instrumentarium” : percussion instruments, strings (struck or plucked), small Cristals. The point of departure precedes the notions of solfege and playing techniques. To achieve this, children learn to play with sounds in the same carefree manner as they learn to play ball or use building blocks, giving spontaneous lee-way to their creativeness. In a game-like context, musical instructions are progressively suggested : silence, listening, timbre, intensity, low and high-pitched tones, resonance, rhythm, etc. Just as a child learns to give form to his or her building blocks, he or she learns to give form to the sounds he or she hears.

This workshop is suited for kids and adults and is free of entrance !
You can register for a session at 16h00 or 17h00 by mailing us at info@soundinmotion.be.