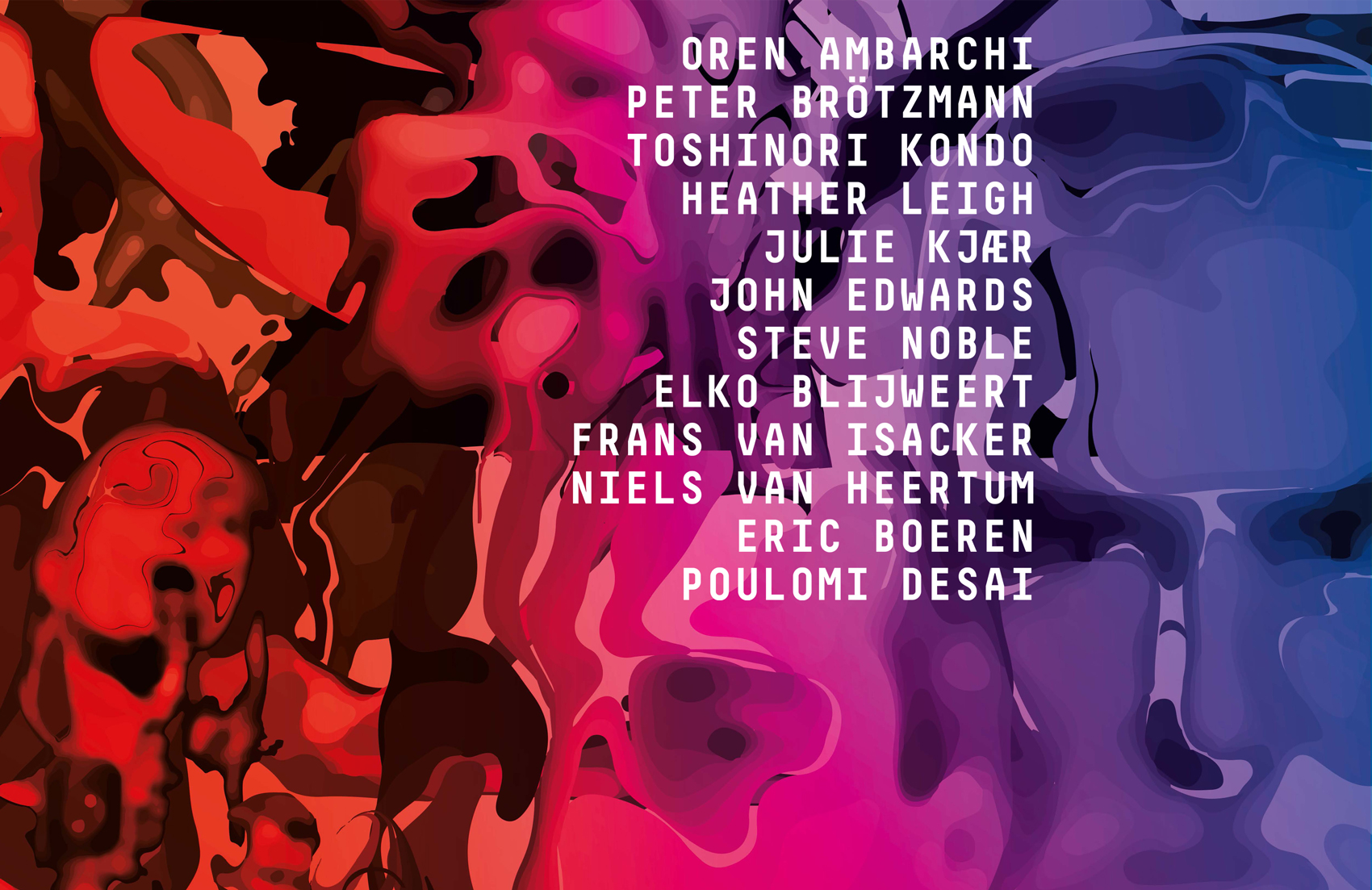 On the second day of the Summer Bummer Festival we continue along the line of diverse and adventurous music. On his releases OREN AMBARCHI is often joined by artists like Jim O’Rourke, Arto Lindsay, Will Guthrie and Mark Fell, live he just needs an electric guitar and a battery of effects to generate his impressive musical world. Legendary saxophone player and free jazz pioneer PETER BRÖTZMANN (tenor sax, tarogato) once again teams up with this Japanese musical brother TOSHINORI KONDO (trumpet, electronics) and HEATHER LEIGH (pedal steel) who replaces the previous announced Sabu Toyozumi. POULOMI DESAI transforms her sitar into a more than suprising electro-acoustic sound source. With JOHN EDWARDS (bass) and STEVE NOBLE (drums) saxophone player JULIE KJÆR brings one of the best rhythm sections in the alternative music and free jazz to Summer Bummer showing us how thin the line can be between composition and improvisation. NIELS VAN HEERTUM (euphonium) and ERIC BOEREN (trumpet, cornet) for the first time bring out their duel of the coppers though it might as well turn into a genuine musical courtship. ELKO BLIJWEERT and FRANS VAN ISACKER refer to Bach, Brian Eno, Boredoms and Beethoven when talking about their guitar and saxophone duo. Where this will end will show and sound on this exciting second day of the Summer Bummer Festival. Over the past two years reed player Peter Brötzmann and pedal steel player Heather Leigh have toured the world extensively and released Ears Are Filled With Wonder and Sex Tape, two albums on Trost. Toshinori Kondo has been the trumpet player in most of Brötzmann’s larger ensembles since the 1980s (Alarm, März Combo, Chicago Tentet, Die Like A Dog, Hairy Bones). This will be the first trio tour for Brötzmann/Leigh/Kondo. Poulomi Desai‘s unique, modified sitar embraces elements of chance, challenge and subversion – industrial, noise influenced improvised, art performances. Her prepared / bowed sitar is extended with modified cassette decks playing her field recordings, circuit bent toys, optikinetic instruments, kitchen knives, axes and massage tools. It is a conscious response and reaction to the idea of ‘authenticity’ seeking to break the rules and expectations of how a ‘sacred’ instrument should be played, the strictures upon the player, the guru-shishya approach, and the assumptions made upon the identity of the player herself. Her sitar is the primary basis for sonic improvisation and exploration; an allegorical antidote to the objectification of the ‘South Asian woman’s body’ in ‘Bollywood’ cinema / ‘popular culture’ and, in a broader sense, affirming her idea of ‘Noise’ as protest. She runs the Usurp Art space and is the Curator of the Grunwick strike exhibition, and a Leverhulme Research Fellow.

Danish Julie Kjær (sax, flute, clarinet), a London resident, is one of the driving forces of the Paal Nilssen-Love Large Unit and is stepping internationally to the fore more and more with her own projects. In 2016 she released Dobbeltgænger, a sublime release for Clean Feed Records on which she balances masterly between composition and improvisation together with renowned players Steve Noble (drum) and John Edwards (bas). Now this powerful trio takes a Belgian stage for the first time. Eric Boeren (trumpet, Cornet) is an extremely versatile musicians. This shows clearly in collaborations with musicians like Peter Evans, Jason Adasiewicz, Tobias Delius, Michael Moore, Han Bennink, Wilbert de Joode, Mike Reed or Joachim Badenhorst. He’s one of the founders of the Amsterdam musicians collective Stichting Doek and always looking for new musical challenges.  For Summer Bummer Boeren is teaming up for the first time with euphonium player Niels Van Heertum who’s not a stranger to the Oorstof series and responsible for one of the absolute highlights of the Fred Van Hove at 80 fest last Februari in a trio with Ernst Reijseger and Fred Van Hove himself. Antwerp based guitar player Elko Blijweert is one of the mainstays of the Antwerp rock, pop and jazz scene. With reed player Frans Van Isacker he shares a past in Franco Saint De Bakker, a combo that set out to introduce jazz to the rocking masses. As a duo they now leave their safe ground of pop, rock and jazz and dive headfirst into the adventure of improvisation. With succes so it seems going by their debut release Atlajala Land from 2015. Musical references include Brian Eno, Richard Thompson, Jackie Mc Lean, Boredoms, Bach and Beethoven…