‘Head to Head’ is a brand new series of interviews by Sound in Motion’s Joachim Ceulemans, talking in depth with artists appearing in the Oorstof concert series, the Visitations residencies, the Summer Bummer Festival or who have a release on the Dropa Disc label. These in depth interviews will be used to promote the upcoming events and releases and who knows maybe they will end up bundled and printed one day.

For the first interview in the ‘Head to Head’ series Ceulemans talks to Raf Vertessen who will  appear in the second Visitations event of 2022 on October 20, 21 and 22 at the Studio where he will be joined by Joe Morris, Will Greene, Anke Verslype, Elisabeth Klinck and Andreas Bral and on Oct 20th by special visitors Tomeka Reid, Rachel Bernsen and Ayako Kato. For more info and tickets go here !

New York-based drummer Raf Vertessen is one of today’s most striking Belgian musicians. He made an impression during the 2021 edition of the Summer Bummer Festival as an interim drummer with Terrie Ex, Hanne De Backer and Signe Emmeluth, and joined De Backer and Raphael Malfliet in a brand new trio during the Oorstof concert series.

Still, until recently he was relatively unknown in Belgium, partly because he left the country several years ago. After he finished high school, the ambitious 18-year-old moved from Tessenderlo in the countryside to Amsterdam to study and then to New York a few years later. He has now been living there for nearly six years, assembling a remarkable resumé. He leads a successful New York quartet of his own with which he will release a second album in the near future. Besides that, he’s active in a trio with the extraordinary guitarist/bassist Joe Morris and saxophonist Will Greene, which he will present for the first time in Europe during a Visitations residency.

“Active in the avant-garde and improvised music scene”, your website states. I don’t see any reference to jazz. Was that a conscious decision?

I mostly want to stress that jazz is not my only influence, but also modern classical music. Until I was 18, I also played clarinet, just like my father, who was a member of the Philharmonic Orchestra of Flanders and the opera of Antwerp and Ghent. Moreover, I also play the clarinet on the latest album of my girlfriend, Charlotte Jacobs.

Besides that I also feel uncomfortable calling myself a free jazz musician. Of course I’m heavily influenced by free jazz, but I was never part of the movement and the broader struggles it was involved in, so I do not want to appropriate it. Over here, in the United States, I notice that is being dealt with in a different way than in Europe, there is more awareness. And jazz, well, I associate it with someone playing real jazz, standards for instance. Something I hardly feel any relation to.

But you did do jazz studies?

Yes, in Amsterdam. Even though I was already looking more towards improvised music, which was hardly ever touched upon. Ornette Coleman, Albert Ayler and Cecil Taylor were never mentioned, for instance.

Why did you pick Amsterdam?

Hard to say. Maybe my father implicitly encouraged me to think internationally. I did have an early dream to move to New York. But I grew up in a little community near Tessenderlo, in the woods, and had never lived in a city before I was eighteen. That’s why I picked Amsterdam first. My parents also thought it was safer than leave for New York immediately.

It’s not that you lacked something here? You wanted a challenge right away?

Yes, I think so, even though I didn’t have a specific preference for Amsterdam. I was familiar with the ICP Orchestra, Misha Mengelberg and Han Bennink, but their music didn’t appeal to me like the music of Cecil Taylor, for instance. I think I wanted to leave Belgium most of all.

And now you have been living in New York for six years. What is it about that place that keeps on attracting so many musicians?

The first year I studied at The New School, which is the trajectory of several Belgian musicians moving here, because of the Belgian American Educational Foundation. At that school I met trumpet player Adam O’Farrill and bass player Nick Dunston, who are members of my quartet.

Without attempting to generalize, the main difference with other cities is that over here, everybody is extremely entrepreneurial and constantly looking to play. There is an enormous drive in the musicians’ community. An example: Ingrid Laubrock has been a musician I have been looking up to for years. When I went to see her a few times and got to meet her, I was suddenly playing with her just a few weeks later. I felt like a huge step forward, while it’s totally normal in New York. I still feel that energy after six years. I want to be here and make music.

Besides clarinet, you also play the drums of course. When did you start with that?

I started classical percussion when I was eight. Maybe I could have become the principal timpanist of the Flemish Opera, because my father occasionally let me sub as a teenager. My whole life, I have been a huge fan of classical music, so it was a blast for me to play the cymbals during a Puccini opera. A great experience that taught me a lot at that age, but I wasn’t my true calling.

If you’re such an avid fan of classical music and played in large orchestras, could you also imagine yourself writing for a larger ensemble or orchestra?

I have thought about that, but around that time I also discovered the music of Joe Maneri, who was mainly active in the 80s and early 90s. He played with an amazing and under-valued drummer called Randy Peterson, who has a become a good friend over the past few years. It’s not that he is a kind of mentor figure, but we hook up a lot to talk and play the drums together. I noticed that I was thinking about issues that have kept him busy as well for over forty years. About things such as rhythm and pulse in improvisation, how far you can go with the repetition of beats, what you can do to make someone feel that pulse, whether you really want that, etc.

But to return to your question: since then I mostly think in terms of chamber music. The ‘Five Pieces For Orchestra’ Opus 10 by Anton Webern is often on my mind when it comes to that. Music for a kind of compact symphonic orchestra, but a quartet in my case. Joe Maneri’s quartet did something similar, it feels like free improvised Webern. Incredible how they did that. I’ve been inspired a lot by that and would like to work with that in the near future.

With your New York quartet, you released a first album a while ago. I still hear a lot of jazz references in it, even if they are mostly linked to the New York scene.

In the quartet, we have moved on to a different approach in the meantime. In March we recorded a new album that better represents what I think is interesting in terms of rhythm, harmony, melody, composition, etc. I’m still proud of that debut album, but that kind of approach has had its time. The new album is mixed, but I’m not sure yet when it will be released. 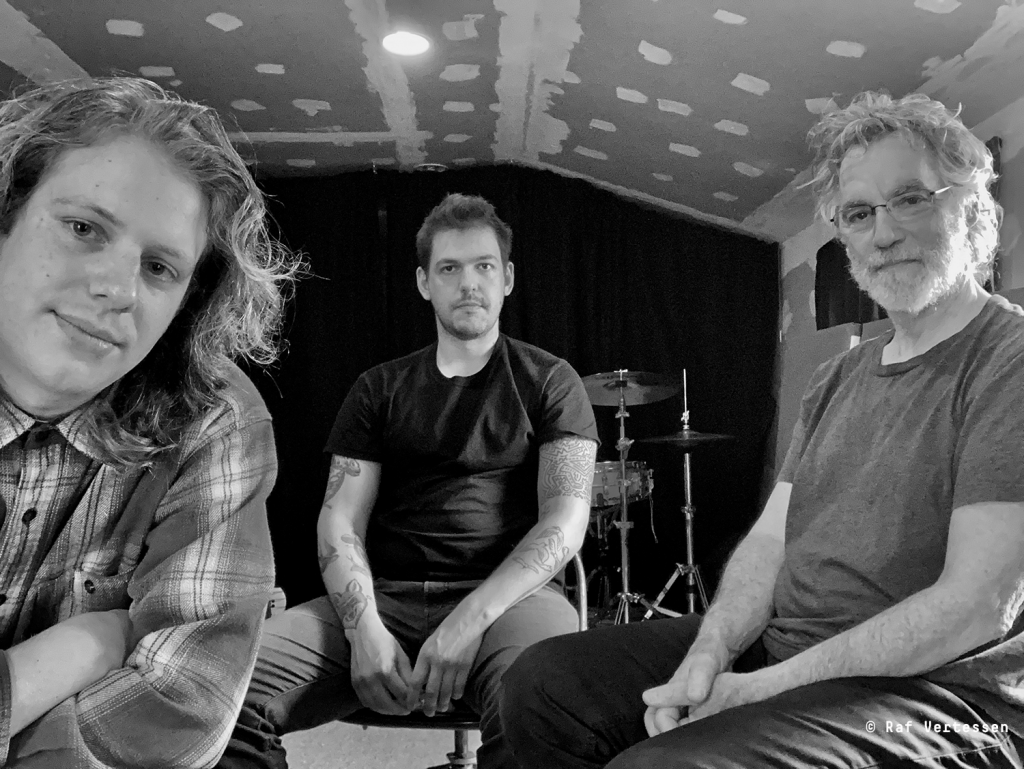 Besides that you also have a trio with Joe Morris and Will Greene, which you will present for the first time in Europe during a Visitations residency. This band seems to be more focused on free improvisation, right?

For sure. We mostly draw inspiration from the AACM, the Chicago scene from the 60s with a.o. Anthony Braxton, Roscoe Mitchell and Henry Threadgill.

How did you meet Joe Morris? He’s quite unique in the world of improvised music.

One of the advantages of the New School is that you can choose with whom you want to study. And I wanted to study with Joe Morris, who has a thoroughly unique approach to music and improvisation.Joe is also very motivating and introduced me to a lot of musicians. He feeds the community like that.

He also has his own label (Riti) and studio at home, where he’s constantly recording and releases much of it. He wanted to record with Will Greene, and since then, we have been a kind of working trio.

Morris plays the double bass exclusively in your trio, or guitar as well?

So far only double bass. For the residency in Antwerp it’s not clear yet. Right before that, he is on tour with Tomeka Reid, for which he travels with a guitar as well. I presume he will use that during the Visitations residency as well, in or out of the trio context.

Do you already have any idea of how you want to approach the residency?

Not specifically. We will obviously present ourselves as a trio and there will be a day with Tomeka Reid and dancers Rachel Bernsen and Ayako Kato. I haven’t met Elisabeth Klinck and Anke Verslype yet, so that will be exciting. I know Andreas Bral from Hanne De Backer’s ‘As We Walk’-project. We will record an album soon and plan to do a large tour next year. 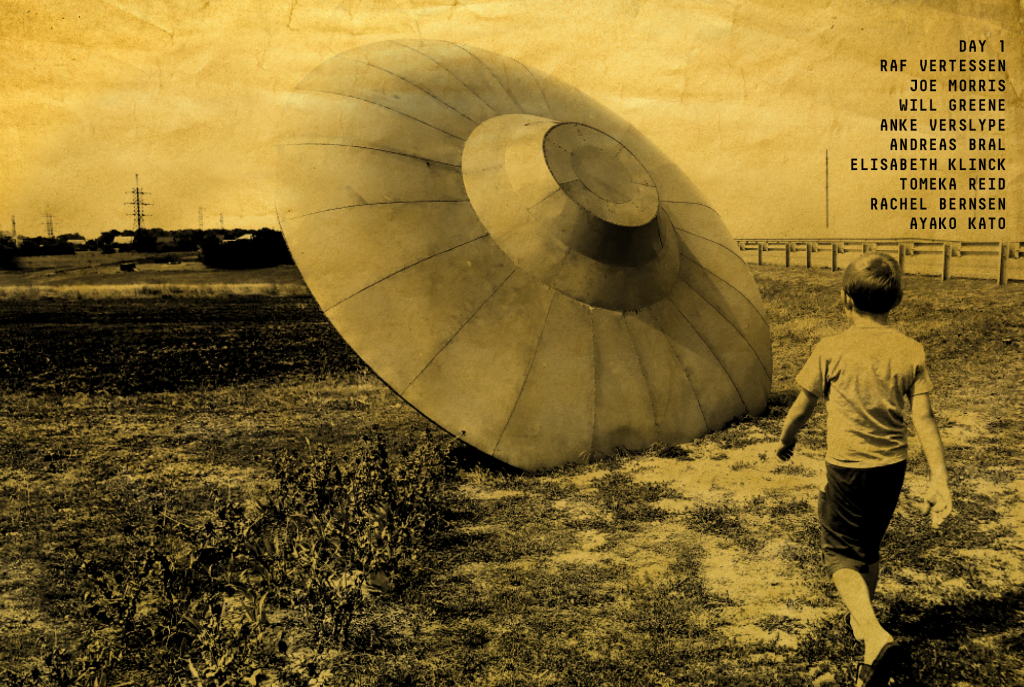 You’re currently in the mountains of Poschiavo, Switserland, for a residency. What is the added value of a residency for you?

There is four of us here. Saxophone player David Leon invited me and bass players Henry Fraser and Florian Herog for this. We play together every day, but mostly work on our own stuff. It’s nice to leave the hectic New York once in a while. New York is an expensive city, and that’s why you’ll have to play a lot of side gigs to make ends meet. You’ll also have less time to work on your own thing. Here I can focus in my own music and read books I’ve been wanting to read for a long time. It’s also inspiring to spend time in a different environment. We’re sitting around a woodstove here with a view of the mountains, it’s very idyllic.

The view during your residency in Antwerp might be less idyllic, but… we’ll do our best to make it worthwhile. Something different: I have seen your perform several times while wearing heavy metal t-shirts, usually bands from the extreme end of the genre, death metal and grindcore. Music that requires a lot of technique and that seems far removed from the free music you’re associated with.

I’m a tech geek, I have to confess, as far as studies is concerned. I use those elements in my improvisations, however briefly. I don’t see myself playing in an actual metal band.

During the corona period I was stuck in Belgium for a while and living with my parents. I was so used to the bustle of New York that the woods of Tessenderlo were driving me nuts after a while. I made it through that period studying the double kick, up ‘til ten hours a day. There are not many drummers using two bass drum pedals. You have people like Will Guthrie, Weasel Walter and Kenny Grohowski, but it’s quite rare in general. I would like to integrate it more into my own music, but that will be a long process. I want to be able to master the language I’m capable of with my hands with my feet as well. There’s one drummer I admire a lot when it comes to that, someone who’s capable of doing wonderful stuff with both feet, and that is Charles Downs, better known as Rashid Bakr.

What are your plans for the upcoming period?

Before the residency, I will be on tour with my girlfriend, playing with her avant-pop project under her own name ‘Charlotte Jacobs’. Worth checking out.